During the inspection where I discovered the missing or crumbling sway bar quick disconnect bushings I also noticed the steering stabilizer bushings were completely missing as well. The shock was just rattling back and forth. Here again not having done any of the custom work myself, the first task was to figure out the brand, type and size of the steering stabilizer bushings. There were no real markings on the piston itself, but with the other Superlift suspension parts, I placed my bet on them.

If I wanted to replace the stabilizer, I found a Rancho Steering Stabilizer here on 4WheelParts.com. No need in spending the $87, if I could test the shock and purchase bushings. From searching through several forums, the test was to remove the stabilizer then push and pull the piston rod to see if it had an equal amount of very firm resistance. It also should not move in or out once you let go being a hydraulic and not a gas shock. Well, even though the shock looks rather rough, it passed the test. Now just find some bushings for it.

Just as with the sway bar bushings, Energy Suspension Parts came through! I needed two sets of shock and steering stabilizer bushings here at EnergySuspensionParts.com part number 19902 as shown circled in orange in the photo. Perfect fit for $5.25 per set.

Shortly after putting Daisy through muddy fields, swampy creeks, woods and a good number of road trips, she developed an awful rattle in the front end. A quick inspection revealed 3 out of the 4 sway bar disconnect bushings were either crumbling from age or missing altogether. Not having done any of the custom work myself, the first task was to figure out the brand, type and size of the sway bar disconnects.

After a thorough search of a number of online Jeep and off-road parts stores, the best match were Warrior Sway Bar Quick Disconnects, 10 inch, Eye-to-Eye. If I wanted to buy new ones I found them on ShopJeepParts.com. Personally, I didn't want to spend $169 for a brand new set when I really only needed bushings, but I could not find them anywhere.

Finally, I ran across Energy Suspension Parts and hit the jackpot! If you need bushings they probably have it. If you own an old set of Warrior Sway Bar Quick Disconnects you realize the inside of the eye is hourglass shaped, so a straight walled bushing would have too much play and wear out quickly. They need a "Shock Eye Bushing" as shown here at EnergySuspensionParts.com part number 98107 or 9.8107 as shown circled in orange in the photo. Perfect fit and for $4.01 per set! My kind of repair!

The Creek in the Swamp

Our first attempt at crossing it was miserable as the 35" MT's sank immediately over halfway into the soft silt and the front bumper supported by a 3" lift was now below the opposing bank. Reverse only added to the misery as the tires ate into the soft bank behind us. A creek in a swamp is only slightly better than quick sand.

After hours of cutting and stacking old fallen oak and hardwood trees, we created enough ramp to gain some traction and back out of the pit. After the first attempt, it was Swamp 1 - Daisy 0. It was only the first of many attempts to come.

Seeing What Our Daisy Could Do 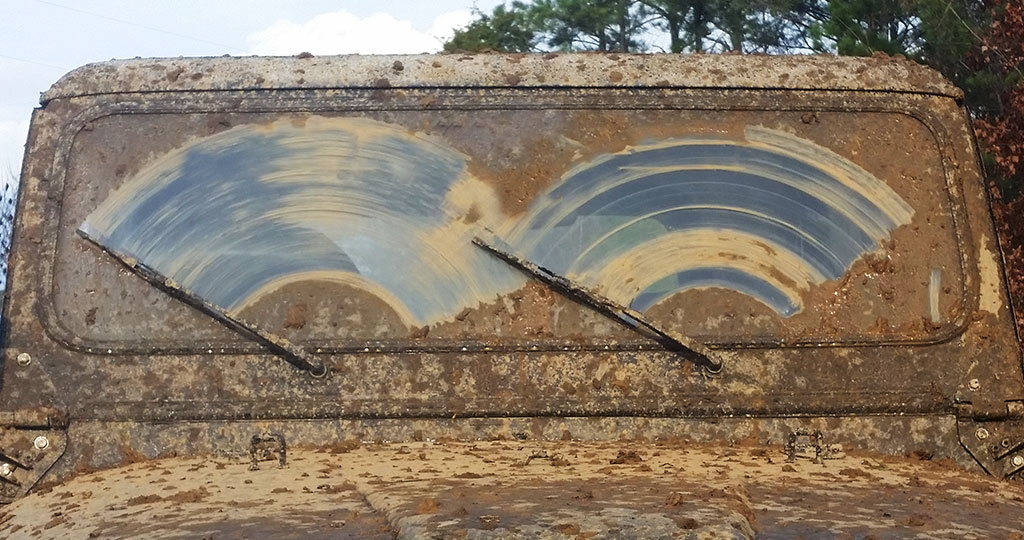 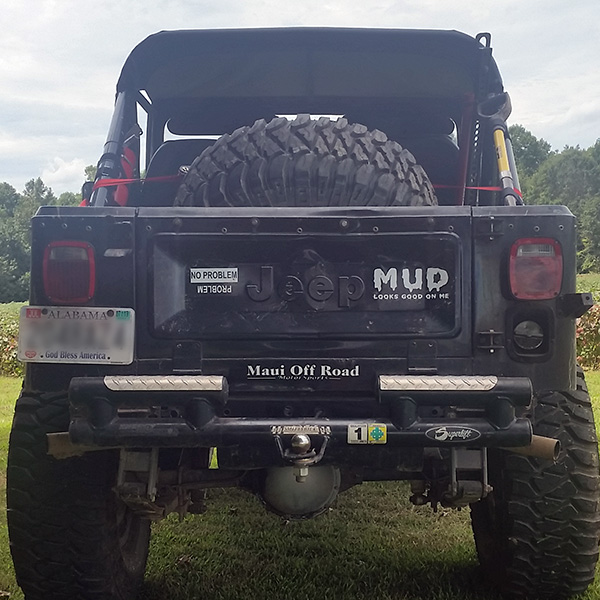 When we first purchased the 1985 Jeep CJ-7, still sporting a hardtop, there was no better time to put her through the paces to see what she could do. After several weeks of rain produced a nice muddy field, with large areas of standing water, it was just calling her name. In the end, the muddy field was no match for the 35" Mickey Thompson's and the Chevy 350 engine dropped in by the previous owner, Mac.

Hats off to Mac and all the custom work done while stationed in Hawaii. The "Maui Off Road", "Inspection 1" and "Hawaii" stickers will remain in memory of his days climbing lava flows in Maui. It might not be rock climbing, but lots of fun was had that day and if Daisy hadn't been so muddy you would have seen her smile!

THE POKE AND MOSEY MACHINE

Even though we have always enjoyed a good road trip, our enjoyment of scenic drives down old country roads became even more exciting after our purchase of a 1985 CJ-7. It is the perfect vehicle for the great outdoors and with the bikini top provides an open vehicle to see the sights, hear the sounds and feel the wind on our faces. She may not be the prettiest, but definitely has increased our enjoyment to poke and mosey around the countryside. She has become known as Daisy.

Look up at the rain,
the beautiful display of power and surrender
Giving us today...

...who will take the blame
For all redemptive motion and every rainy day
When He gives Himself away

"Daisy" written by Jon Foreman. From the Album Nothing Is Sound by Switchfoot